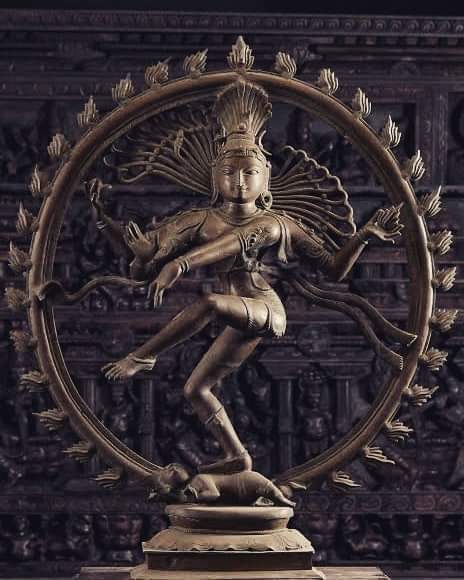 Nataraja is a well known sculptural symbol in India and popularly used as a logo of Indian culture, in particular as one of the finest illustrations of Hindu art.
Stone reliefs depicting the classical form of Nataraja are found in numerous cave temples of India, such as Ellora, Elephanta and Badami.

Shiva Nataraja is a brilliant conception. It combines in a single image Shiva’s roles as creator, preserver, and destroyer of the universe and conveys the Indian belief of the never-ending cycle of time. Shiva’s dance is set within a flaming halo. He holds in his upper right hand the damaru that made the first sounds of creation.

His upper left hand holds agni, the fire that will destroy the universe. With his lower right hand, he makes abhayamudra, the gesture that allays fear. The dwarf like figure being trampled by his right foot represents apasmara purusha, illusion, which leads mankind astray.

Shiva’s front left hand, pointing to his raised left foot, signifies refuge for the troubled soul. The energy of his dance makes his hair fly in all directions. The symbols imply that, through belief in Shiva, his devotees can achieve.